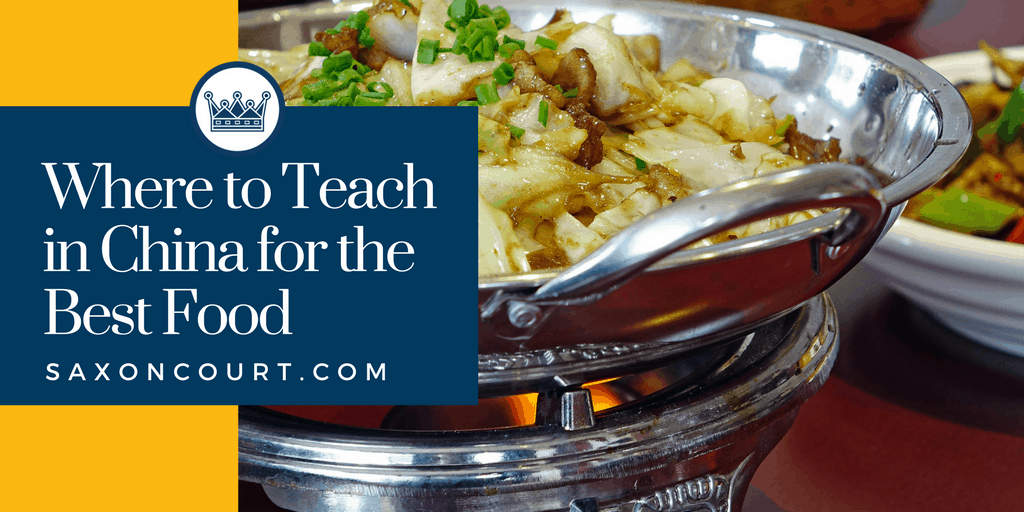 Where to Teach in China for the Best Food

When most people move to China to teach English, they look forward to eating the food. Just about everyone has eaten Chinese food in their home country, but no matter how good that might have been, the food in China is incredibly different to what you’ll get in most Chinese takeaways. This is both good and bad. You will encounter amazing, tasty dishes in China, as well as parts of animals you never thought you would eat. The only thing you can be sure of is that eating in China is an adventure. And if you want to be a part of this adventure, try some of the following areas for the best food the country has to offer.

When it comes to choosing a place to live and teach English in China, the food is a big influence. In fact, choosing the right city with the right kind of food can be almost as important as choosing the right school for your happiness and sense of belonging. And when it comes to Chinese food, you can’t go past Shanghai. An international city that is nonetheless very local at the same time, you can find any kind of food you want here. Ever wanted to try Mongolian food? Shanghai has a restaurant that serves it. Just want to try some traditional Chinese snacks? You’ll find them on every street. Feel like something with a more European flare? Try the French Quarter. Anything you want to eat you’ll find it here, and it will be good.

Most people, when they think of Chinese food, think of Peking Duck. And Beijing, where it originally came from, is the best place to eat it. Most of the top restaurants serve Peking Duck, either with pancakes or with more elaborate side dishes. You can also get great Mongolian food in Beijing because it’s actually very close to the Mongolian border. This food isn’t often found outside of this area, so make sure you try it while you’re in China.

As an added bonus, Beijing has some of the best street food you’ll ever find. Chinese snacks are so good you’ll have to try them to believe them, and there are so many that you’re bound to find something you love. Try one of Beijing’s famous food streets for the best variety.

It isn’t only the large cities that have good food, some of the smaller cities are also becoming known for their cuisine. If you want to eat Chinese food that tastes like no Chinese food you’ve ever even heard of, then try Chengdu. Chengdu is the capital of the Sichuan Province and is known for its extremely spicy food. The people who live there have been eating the same way for centuries so they can handle the heat, but most westerners will find it overwhelming, at least at first. It’s best to travel here in the cooler months, so you can appreciate the food and try the delicious Sichuan hotpot, which is incredibly spicy. It’s also fire engine red, so you really know what you’re getting into even before you take a bite.

Cantonese food is markedly different to other cuisines in China. It features vegetables that are only lightly cooked and sweet sauces that suit everyone, including people who don’t really enjoy spicy food. Cantonese food is very similar to the Chinese food you would get at home because most of the immigrants who left China and moved overseas many years ago were from the Guangdong Province, which is where Cantonese food originated.

Xiamen is in the Fujian Province and is known for great seafood and the sweet flavours that this province is famous for. Strangely enough, despite its popularity as a food destination, Xiamen isn’t a large city, but it’s still an amazing place to explore while you eat your way through all the seafood dishes you could ever want to try. You can also find a lot of sweet and sour dishes in this area if you enjoy that dish back home.

A controversial city for a lot of reasons, but a place that you can’t miss if you’re a real foodie. Hong Kong has everything. The city is amazing and organised and there’s a mix of traditional Cantonese food and foreign food that means every food craving you have can be satisfied here. The seafood is amazing, and the only thing to avoid is the milky tea that’s served in some of the cafeteria-like food shops. It doesn’t taste at all like the tea that foreigners are used to and is, in fact, one of the worst things I’ve ever tasted.

Xi’an is the oldest city in China and is located in the Shaanxi Province. It was the imperial capital for more than a thousand years, which is reflected in its food options and in the sheer diversity of influences you can find here, culturally and in the food. When you travel to this area you can spend some time in the Muslim quarter and taste spices and dishes that were brought over on the Silk Road by traders, or try the more exotic meats such as camel or donkey. This combination of influences and cultures makes Xi’an a fantastic place to explore and experience while you’re living and teaching English overseas.

Have you eaten some amazing food in China? Let us know what you ate and where in the comments below.

For more about travelling and living abroad, check out our Teaching Abroad Blog. Or jump right in and browse our teaching jobs.

Gayle Aggiss an ESL teacher and a dedicated traveller. She’s taught in Fuzhou, China and Hanoi and much prefer smaller cities to the larger options. When she’s not on the road, she lives in Perth, Australia.  She writes about education, ESL teaching specifically, and you can view more examples of her work at www.gayleaggiss.com