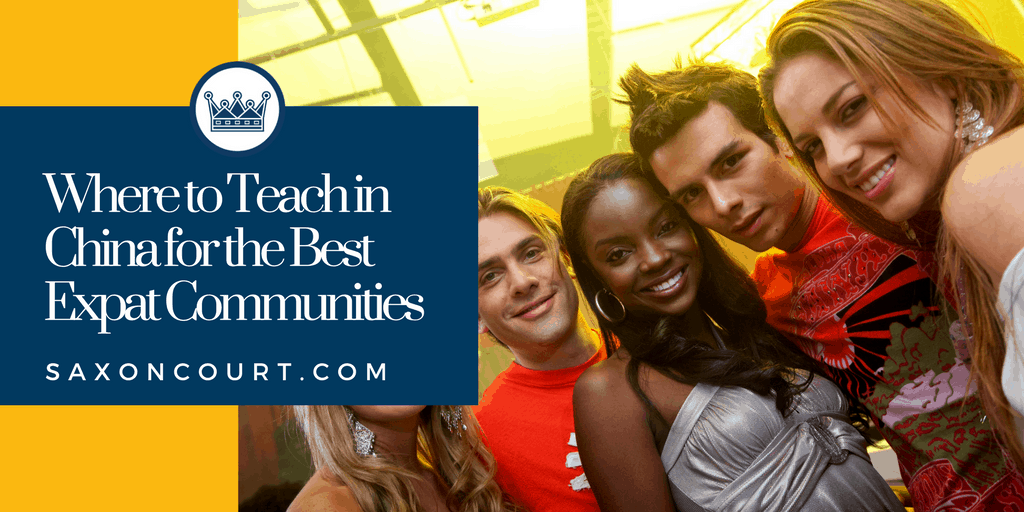 Where to Teach in China for the Best Expat Communities

When you move to China to teach English, you want to do more than teach. You want to make memories, which means you need to explore the country, eat the food, and watch strange and colourful festivals. But one of the things you may not think about when you move to China is the expat presence. Expats are foreigners who’ve lived in China for a while and they can be key to you finding the best places, the best foods, and the best experiences in your new home.

Why You Need Expats

It can be tempting to think that you’ll move to China and make friends with the locals and have a social life that’s similar to the one you enjoyed back home. But that isn’t as easy as it sounds. Depending on where you go in China, the locals may have a varying level of English, or none at all, which can be a major barrier to any kind of deep friendship. The language barrier also adds another layer of difficulty to your interactions. Even if the locals you spend time with speak English fairly well, it’s still harder to express yourself and harder to be understood. And on the days when you’re tired and fed up and just want to vent, there’s nothing like venting to someone who can easily understand you without you having to think through your word choices.

Making friends with expats also has other benefits. They’ll know all the places to eat that suit western tastes. They’ll be as eager to travel as you are, so you’ll have ready-made companions for your weekend trips. And they’ll understand the unique challenges of living in a non-English speaking country. So when you need someone to point out the difference between washing powder and softener in Chinese script they won’t laugh at you.

So researching the expat community in the city you want to teach in can be a great strategy for ensuring that you have the best time possible while teaching in China. And here are some of the best options.

No matter what you want from your time teaching in China, Shanghai has it all. Great food, amazing history, and an expat community that’s well established and easy to find. Shanghai is a city that has managed to blend its eastern and western influences, so many expats find it a comfortable place to live. It was also one of the first cities in China to start modernising, with movements like women’s liberation altering the mood and the standards of the city. This combination of factors, along with the fact that the city has still retained its charm and original identity despite all the changes, makes this an ideal place for expats.

In Shanghai you will find lots of English teachers, but also professionals from every walk of life, drawn by the low cost of living and the incredible amenities they can enjoy in this cosmopolitan city.

If you want to get away from the older parts of China and enjoy a more modern feel, Shenzhen may have what you’re looking for. This is a fairly new city that contains about 14 million people, most of them around the age of thirty, and it’s located a short ferry ride from Hong Kong. The weather is warm all year round, the shopping is great, and the city is full of bars and restaurants that draw people from all walks of life. Best of all, there’s a number of English teaching schools in the area, so the expat community is extensive.

Beijing is the city to learn in, being the home of most of China’s major universities while still retaining the essence and spirit of the ancient culture. This combination has made the city home for both Chinese students and those from other countries who want to study the Chinese culture or the language.  And this has resulted in an ultra-modern atmosphere and an extremely diverse expat community. Also, because Beijing is the business center of China, almost every major company has its headquarters here, which has brought in an influx of people from all professions looking for job opportunities and a different way of life. So if you’re looking for a new social group while you’re teaching in China, you’ll definitely find lots of choice in Beijing.

Often considered to be one of the most beautiful cities in the world, Hangzhou is the perfect place to live while you’re teaching in China. This city still retains much of its original charm, and has tea houses dotted all over that are used for business meetings as well as a relaxed, laid-back atmosphere that’s very different to other megacities in China. Hangzhou’s natural beauty and close proximity to other major cities are major draws for expats and you’re sure to find a lot of support and help when you teach English here.

Guangzhou is one of the biggest economic centers in China, third to Shanghai and Beijing, and this is reflected in its diverse and extensive expat communities. It has a long economic history dating back to the days of the Silk Road and its dedication to business and finance remains the same today. This commercial center doesn’t have the culture of some of the other cities, but it definitely has the amenities and the proximity to more traditional areas which make it a perfect base for your time in China.

This city has a little bit of everything. It has the cultural heritage as well as more modern influences in key parts of the city center, most of them very popular with the expat community in the area. The city is also home to several large universities and has one of the largest student populations in the country, so it has a young feel that’s very appealing for foreigners looking for a place to live that’s both fun and interesting. If this is the kind of atmosphere that appeals to you, definitely check out Nanjing when you’re considering where to teach in China.

What experiences have you had with expat communities in China? Share your experiences with us in the comments below.

I’m an ESL teacher and a dedicated traveller. I’ve taught in Fuzhou, China and Hanoi and much prefer smaller cities to the larger options. When I’m not on the road, I live in Perth, Australia.  I write about education, ESL teaching specifically, and you can view more examples of my work at gayleaggiss.com