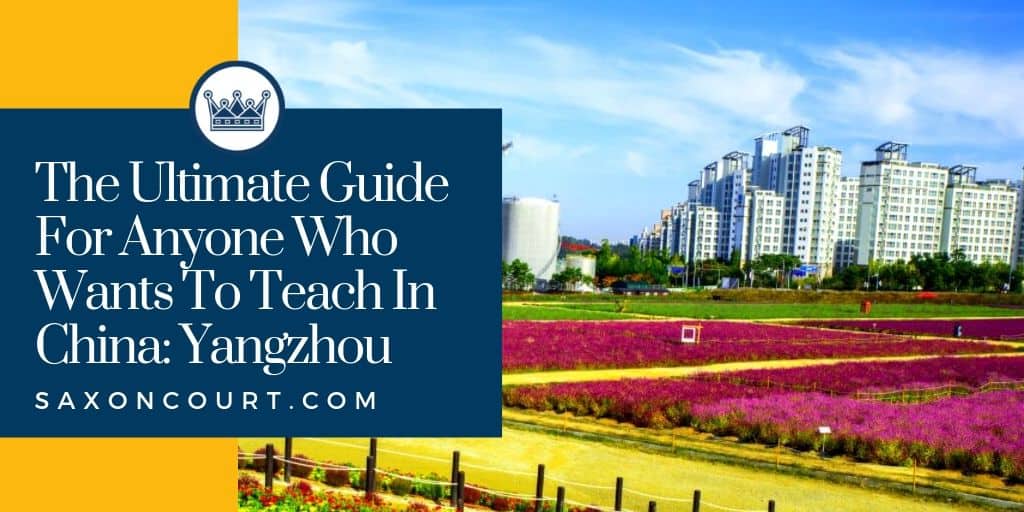 The Ultimate Guide For Anyone Who Wants To Teach In China: Yangzhou

If you want to teach in China, Yangzhou, then you’re in for an incredibly exciting time. Yangzhou is a relatively smaller city and doesn’t get as many tourists or visitors. This means that you’ll be surrounded by more authentic Chinese culture, as well as some of the best food you’ve ever eaten. So, if you’re ready for this adventure, then here’s what you need to know about teaching in this part of China.

Yangzhou is a city in the Jiangsu Province, which is in the eastern part of China. It’s north of Shanghai but south of Beijing and sits on the northern bank of the Yangtze River. In fact, Yangzhou is surrounded by water and criss-crossed by canals and lakes. There is even a moat around the southern and eastern sides of the city, called the Han Canal.

Yangzhou is a fairly small city by Chinese standards, with around 4.5 million people living within the city borders. It was once one of the wealthiest cities in China and home to powerful merchant families, artists, poets, and scholars. During imperial times, this city was the capital of the ancient Yangzhou prefecture. This means that it has a long and colourful history, which you will see for yourself when you teach in China, Yangzhou.

Yangzhou has a subtropical monsoon climate. The winters are longer than other seasons at about 4 months, and spring and autumn are around 2 months long each. The hottest month is July, with average temperatures around 27.6°C, and the coldest is January at around 1.7°C. Temperatures fluctuate throughout the year between 39.8°C and – 19°C, so be prepared to endure some fairly extreme weather there.

March and April are the nicest month if you’re just visiting rather than moving to teach in China, Yangzhou. These months have less rain and the temperatures are neither too high nor too low. The rainy season in Yangzhou is from the middle of June to late July and the city gets an average rainfall of 1030 mm.

Why Teach in Yangzhou, China?

When people teach in China, they have their own reasons for choosing a certain city. Here are some of the reasons you should consider Yangzhou for your teaching position:

Want to learn more about some of the other options: 4 of the Best Cities to Teach English in China

What to See in Yangzhou, China

You’ll have plenty of time to explore when you teach in China. Yangzhou is a famously beautiful city, with lots of attractions for tourists. In fact, these attractions are becoming more and more famous outside of the city too. So, you’d better get there to see everything before it gets too crowded. Here are just some of the top attractions you should see:

A Buddhist Temple built between 457 and 464 A.D. with lovely religious architecture and gardens.

An otherworldly and scenic site that’s best known for its beauty in the moonlight and has been the subject of poetry in the city for years.

A salt merchant’s house from the Qing Dynasty, which went from 1644-1911 A.D. The gardens are extremely well-preserved and stunning, complete with wood and stone sculptures and carvings.

This canal is 1,700 kilometres long and is the longest canal in the entire world. It starts in Beijing and runs all the way down to Hangzhou. The canal was created in the 5th century B.C. and was used for water conservation in ancient China. It was also a big part of the cultural and economic exchange between the north and south of China.

Yangzhou is also known for its many beautiful and well-preserved ancient gardens. It’s also small enough that you can walk or bike your way around. So, make sure you spend some time exploring the city when you teach in China, Yangzhou.

Once you arrive in Yangzhou, you’ll realise how much the Chinese food that you eat at home has changed. Chinese food isn’t just one thing. There is a huge variety of different cuisines throughout this massive country, all of them coming from the unique culture mix that make up China. In Yangzhou, the traditional cooking style is known as Su Cuisine. This is one of the Eight Culinary Traditions of Chinese Cuisine. It focuses on food that’s soft but not mushy and taking pride in the appearance of the dish to enhance the eating experience.

The Su Cuisine in Yangzhou is characterised by superb cutting techniques and vibrant, fresh colours and tastes. The experience is visual as much as it is about taste and includes dishes that will appeal to almost any palate. Some of the top dishes to try are:

This city is particularly famous for its soups, so make sure you try a few of them when you teach in Yangzhou. But whatever you enjoy eating, you definitely won’t starve when you decide to teach in China, Yangzhou.

Gayle Aggiss an ESL teacher and a dedicated traveller. She has taught in Fuzhou, China, and Hanoi and much prefers smaller cities to the larger options. When she’s not on the road, she lives in Perth, Australia.  She writes about education, ESL teaching specifically, and you can view more examples of her work at www.gayleaggiss.com.