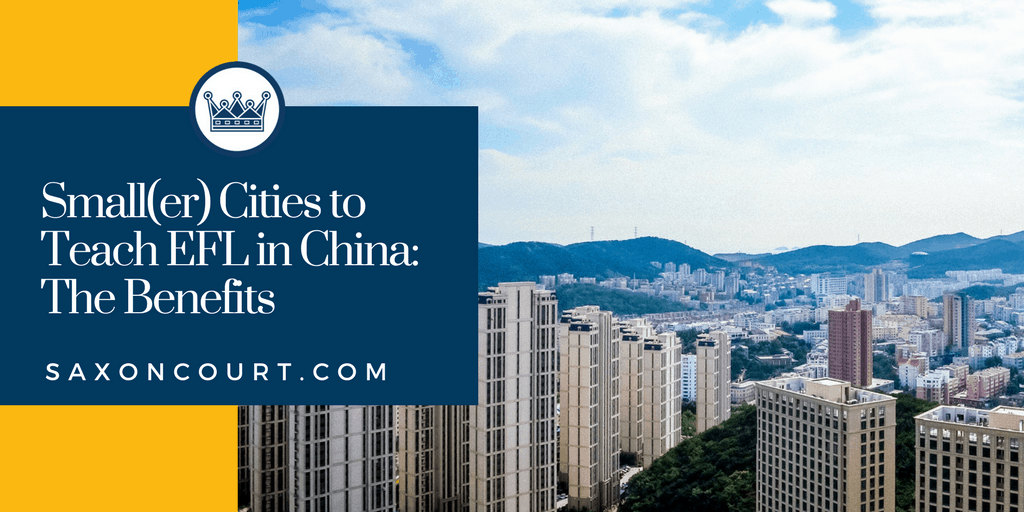 Small(er) Cities to Teach EFL in China: The Benefits

Teaching in China offers a variety of opportunities to get off the beaten track. This includes some of its small(er) cities (where “small” is a relative term). These lesser known cities offer as much – or more – opportunity than their larger counterparts.

When you start thinking about which country (and then which city) you want to teach English as a Foreign Language (EFL) in, your research might lead you to the big cities, the capital cities. And there is absolutely nothing wrong with wanting to live in a big metropolitan city in another country. There are numerous advantages to living in such a city (like Beijing or Shanghai); however, it is worth investigating the benefits a small(er), perhaps lesser known city has to offer. It is also important to note that these “smaller” cities are not really that small. They often have populations over a few million, especially those in China.

The Benefits of Small(er) City Living

The saying that ‘you are not just a number at a small company’ rings very true in smaller cities around the world. In the big cities in foreign countries, there are lots of chances for you to find and interact more with people who are expats just like you. This may mean that by spending your free time with other foreigners, you lose out on opportunities to improve your Mandarin and learn more about the local culture. In a smaller city, there might not be as many foreigners, and chances of locals speaking English at the 7-Eleven or Family Mart convenience stores are low. This forces you to focus more on and improve your Mandarin, which would benefit you in the long run.

There’s a great series on learning languages here. Though it’s meant for English learners, the principles remain the same for teaching yourself Mandarin.

Furthermore, living and teaching in these lesser-known cities mean that you can learn more about China and the locals. You might not be able to find your favourite imported products in these cities, which is a good thing! Go sample local goods and products. You may not like everything you try, but at the very least you’ll get stories to tell back home.

In 2013, the two biggest cities in China – Beijing and Shanghai – were both listed as the most expensive cities to live in. While you would be able to keep the cost of living low, Beijing and Shanghai also offer lots of opportunities to spend your money. So, if your main reason for moving to China to teach EFL is to save money (whether to pay off student loans, save for travel purposes, etc.), it would be worthwhile moving to a smaller city, like Xiamen or Changsha, where the cost of living comes at a more reasonable expense.

Want to read more about the cities? Read Small(er) Cities to Teach EFL in China: The Cities. (If you’re already making plans, however, you can apply for teaching jobs in China now.)

For more on living and working abroad, visit our Teaching Abroad Blog. Or check out the China Guide.

Denine Walters is currently a freelance writer, editor/proofreader and ESL teacher. Previously, she taught online English lessons to students from all around the world and, before that, she lived and taught English to young learners in Taiwan. In her free time, she likes to read, do scrapbooking and grammar quizzes, and travel. For her educational background, she has an MA in Politics, with a dissertation written on post-conflict peacebuilding, a BA Journalism degree, a TEFL and CELTA certificate, and also a few certificates in various other short courses.