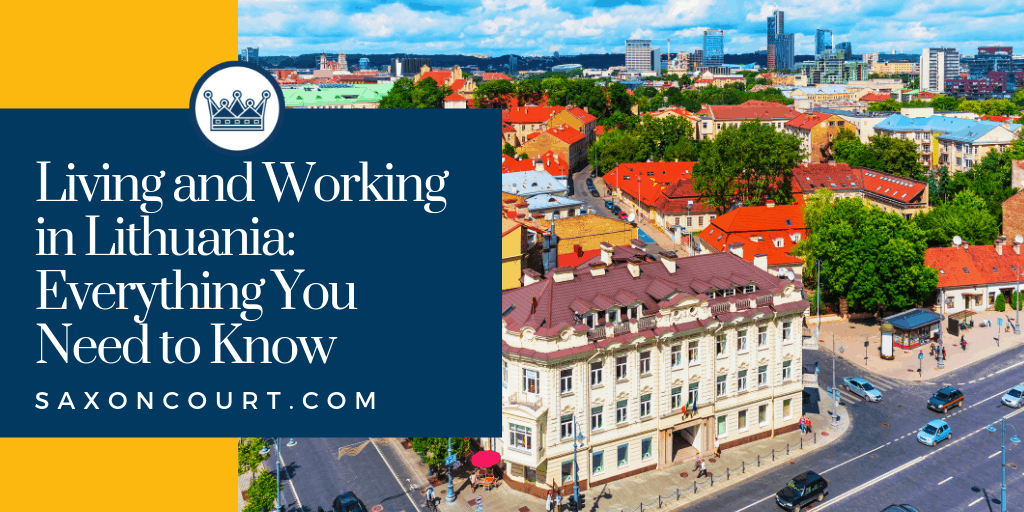 Living and Working in Lithuania: Everything You Need to Know

Those who plan on moving to Lithuania have a lot to look forward to. With its cultural richness, beautiful architecture, geographical position and lots of opportunities to work, your transition won’t be as difficult as you may think.

History and Geography of the Country

Those somewhat less knowledgeable about the history of the world and especially European civilization are inclined to the general conclusion that this is a country somewhere behind Mexico! Most foreigners only know that Lithuania, together with Latvia and Estonia, was part of the USSR for decades up until 1990.

In addition to being the undisputed geographical center of Europe, Lithuania was and remains the country at the crossroads of all four major European denominations (Roman Catholicism, Orthodoxy, Protestantism, and Judaism), and a meeting point for three historical regions of Europe (North, Central, and Eastern).

If it is true that geography has a decisive influence on the historical and cultural destiny of the nation, then Lithuania is a typical example of this truth.

Lithuania is the largest of the three Baltic countries with an estimated population larger than 3.5 million people. Native Lithuanians make up a staggering 84% of the population while the three most dominant minorities are Poles, Russians and Belarussians.

Although English is the official language of the country, Polish, Russian and Ukranian are widely spoken.

Lithuanian is also one of the oldest European languages and it has had the most success in preserving the ancient phonetic system and most of the morphological features among all the living Indo-European languages.

About 3 million Lithuanians speak the language and it is spoken by more than a million people living in other countries such as the United Kingdom, Canada, the United States and Spain to name a few.

In Lithuania, there is a law that states that all business must be conducted in the official language of the country, namely, Lithuanian. Nevertheless, besides the upper-mentioned law, English is still taught in schools as a second language which means there is always work for ESL teachers in Lithuania.

Getting a Job in Lithuania

Since Lithuania became a member of the EU, all who come from EU/EEA countries, as well as their family members, don’t need to get work permits. This law also applies to residents of Switzerland and their families. They have the same rights as Lithuanian citizens when it comes to working conditions, salary, social insurance as well as professional training.

The Lithuanian Labor Exchange assists those looking for a job in finding one. There are 46 local labour exchanges in Lithuania, where you can get information about job openings, opportunities for education, services and practices in the Lithuania labour market and the laws concerning it as well as living and working conditions in the country.

If you want to get more information about the labour market, you can contact the Lithuanian Labor Exchange completely free of charge on the following number: +370 700 55 166.

By contacting a EURES adviser in your country you can get all the necessary information about the living and working conditions in Lithuania.

Applying for a Job

Most employers select candidates based on CV applications. This is your first chance to get the employer’s attention and make them interested in hiring you. To be recognized as a serious candidate, it is not enough to have only the required qualifications but to present them in the best possible light to someone who doesn’t know you at all.

Therefore, you should take writing your CV very seriously and pay attention to every detail.

Of course, you could also eliminate the guesswork by applying through Saxoncourt here.

Before moving to Lithuania you should make sure your passport is valid and get your diplomas and other references translated to the Lithuanian language. As mentioned earlier, contact a EURES adviser in your country before moving. They have all the information you are going to need.

Since there is a chance that your employers in Lithuania will wish to contact your previous employers, contact those who can provide references. Bear in mind that most employers in Lithuania require their employees to have good knowledge and command of the Lithuanian language. In case you feel like you should work on it, enquire where you can enroll in a course.

Also, make sure to get information about how the move will affect your taxes and benefits and whether you should fill out any forms.

The Lithuanian law clearly states that those who wish to reside in the Republic of Lithuania, temporarily or permanently, must obtain a residence permit to do so.

This permit can be issued regardless of age. However, applicants under the age of 18 must have their parents or a legal guardian apply for them.

Temporary permits can last up to five years except in the case of students where the permits are issued per one year only.

To quickly sum up, your Lithuanian should be very good if you wish to live and work there (unless you work with an agency or recruiter like Saxoncourt). Prepare your paperwork in advance and make sure you have everything you need. Finally, laimingas darbas!

Milica Madić is a freelance blog/article writer from Serbia with experience in teaching and working with young learners.