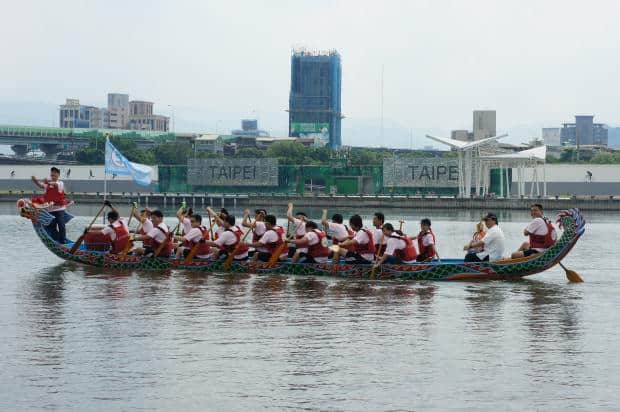 What is Dragon Boat Festival?

Dragon Boat Festival, or Duanwu Festival has been celebrated in China and anywhere that large numbers of Chinese people live since before the birth of Christ. It is said to commemorate the death by suicide of the statesman Qu Yuan, who threw himself into a river after the city he was living in was captured by Qin Shi-Huang, the first Emperor. He was also a noted poet, and the local people greatly admired him. They went out into the river on boats to try and save him (the origin of the Dragon Boat races) and when they could not, threw balls of rice in the river to distract the fish that would otherwise have eaten his body. This is said to be the origin of zongzi, the traditional rice cakes wrapped in bamboo leaves.

As mentioned above, there are annual Dragon Boat races. Teak vessels crewed by teams of rowers compete for the prestige of winning on the day of the festival. Also, people will make and eat zongzi, rice wrapped in leaves and filled with any number of different fillings. Also consumed in realgar wine, white wine treated with an arsenic. (Don’t worry! It’s harmless.) compound giving it a bright colouration and said to offer protection from bad humours and evil spirits.

Where to See Dragon Boat Races

There are celebrations held at all towns and cities, although obviously if you’re somewhere with a nice stretch of river that will add spice to the boat racing. Why not form a team of your own and go for the glory?

When to Celebrate Dragon Boat Festival

The festival used to be called the Double Fifth Festival, as it falls on the fifth day of the fifth month of the Chinese lunar calendar. This means it usually falls in the summertime, usually during June. In 2016, the Dragon Boat Festival falls on Thursday, June 9.

We may not be able to help you attend this year, but there’s always next year. Sign up now to teach abroad, or check out our jobs.